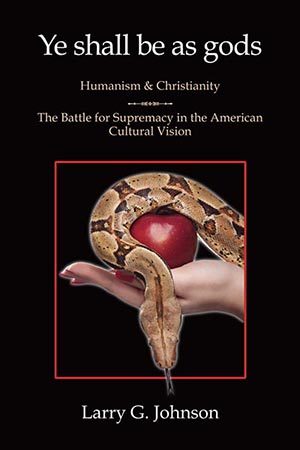 Americans are angry, and this anger is often expressed in a scatter-shot resistance to what they perceive is happening in American society. They know that something is systemically wrong with America’s institutions and direction, and they see and recognize the symptoms but can’t diagnose the single disease that has metastasized throughout the American cultural vision. That disease is humanism and its many children (progressivism, naturalism, liberalism, etc.). The book focuses on root causes of the humanist-Christian culture wars but also connects those causes to the topical moments about which Americans read in the newspapers and magazines; listen to on broadcast media; and experience in the home, workplace, and culture at large.

Humanism is the world’s second oldest religion. It began with the serpent’s first whispered words to Eve, “Ye shall be as gods…” It stands in opposition to the eternal truths built into the foundations of creation and the revelation of those truths to the ancient Hebrews and first century Christians. The book chronicles how the institutions of American life—religion, government, politics, economics, education, physical and human sciences, family, and popular culture (arts and the media)—have been systematically and substantially captured by the humanistic worldview. Because of this battle of worldviews, twenty-first century America is a divided nation. Although most Americans still hold to the central cultural vision of the Founders, much of the leadership of America’s institutions embrace the humanistic philosophy that stands in opposition to the beliefs of its people, and the results are the escalating culture wars that permeate every facet of American life. Without an understanding of humanism’s tenets, their connection to our modern miasma, and the application of a prescriptive remedy necessary to counteract humanism’s unrelenting assault, the central cultural vision under which the nation was founded will be forever lost.

Paperback: Available from Amazon.com and other book marketers.
Retail $23.99

eBook: Available in Amazon Kindle and other eBook formats.

Study Guide – Teacher Edition – Ye shall be as gods
Paperback: Available from Amazon.com. Click to purchase from Amazon.
Retail: $12.00

Study Guide – Student Edition – Ye shall be as gods
Paperback: Available from Amazon.com. Click to purchase from Amazon.
Retail: $12.00