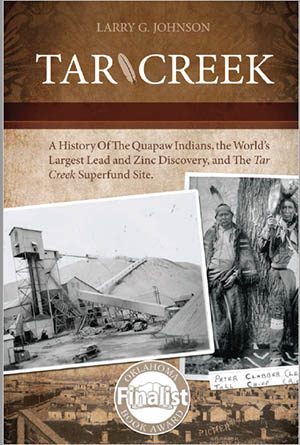 History! Love it or hate it, we can’t ignore or escape it. As one writer proposes, history is a dynamic web of change and no person acts or event occurs without causing change to that web, and all of these acts and events interconnect the past with present and future. Therefore, each of us in linked to everything in the past, to each other, and to the future.

And this proposition is uniquely demonstrated in Larry Johnson’s Tar Creek—the story of the Quapaw Indians and their ancient history, the world’s greatest discovery of lead and zinc on a tiny Indian reservation in the far northeastern corner of the soon-to-be state of Oklahoma, and the making of oldest and largest environmental Superfund site in America. The world’s greatest discovery of lead and zinc rivals that of the 1849 California gold rush in drama, riches discovered, and lasting impact on the nation. The journey to Tar Creek also deals with the American Indian from his first footsteps in the Western hemisphere down to the twenty-first century, the founding of the United States, and the transition of Oklahoma and Indian Territories to statehood.

The discovery of lead and zinc deposits in Picher, Oklahoma in the summer of 1914 serves as the focal point of the book. Many events and links to the past preceding the discovery are chronicled. Events and consequences from that discovery to the present are also noted. One might visually describe this story as an hourglass with the discovery of lead and zinc at Picher as the skinny neck through which all of the interconnected acts and events preceding the discover (the top half of the hourglass) are slowly moving toward (causing or impacting) that discovery. The bottom half of the hourglass is literally the fallout from the discovery or, as one might put it, the repercussions ninety years later.

Tar Creek tells an interesting story from a perspective not seen before. Portions of the book deal with grand themes and momentous events. Other chapters deal with the mundane and minutia of life in frontier mining camps. As time progresses, some of the vents and players in our story rise to prominence and then recede into obscurity. Other seemingly insignificant actions and events create ripples that become waves that become tsunamis that etch a lasting mark on the shores of history.

Tar Creek connects these relatively independent stories into a larger and more revealing story that ranges from the era of pre-history to today’s newspaper headlines.

Available from Amazon.com, Tate Publishing.com, and other book marketers. Also, available in various eBook formats including Amazon’s Kindle. Click to purchase from Amazon.