Culture Wars – Dispatches from the Front 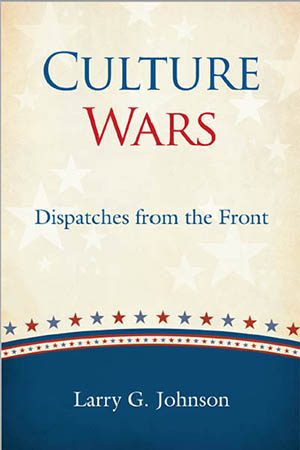 This book contains fifty-five articles originally published in CultureWarrior.net over a period of three years. The articles chronicle the rapidly accelerating cultural drift that has divided the nation since the 1960s. The culture wars are the product of the conflict between worldviews competing for supremacy in the American republic and on a larger scale in all of Western civilization. On one side we have those who hold to the Judeo-Christian worldview which was the heart of Western civilization for 1,500 years and America since the arrival of the first Europeans in the early 1600s. On the other side are those who champion a humanistic view of the world that has proliferated since the Enlightenment era of the 1700s. Those of the humanistic worldview have risen to leadership in all institutions of American life, and their humanistic policies, laws, and initiatives are being imposed on a nation whose citizens that still largely cling to the biblical worldview of the Founders. To this mix we must add the burgeoning growth of the worldviews promoted by Islam and Eastern religions.

The culture wars are being fought in virtually every sphere of life—government, business, law, politics, economy, education, the sciences, media, the arts, entertainment, religion, marriage, family, health care, and popular culture to name just a few. Each of these spheres produces seemingly unrelated instances of cultural conflict. Yet, it is in the accumulation of such present-day moments of conflict that we gain an understanding and direction of the cultural drift. From a consistent and thoughtful examination of these topical moments, we may clearly define the reasons for “why we fight” in the raging culture wars.

The purpose of this book and the mission of CultureWarrior.net are to participate in the redemption of culture in all of the institutions of American life through sharing the truth of the biblical worldview which was at the heart of the nation’s founding and formed the basis for the central cultural vision by which it is governed.

Available from Amazon.com and other book marketers. Also available in various eBook formats including Amazon’s Kindle.